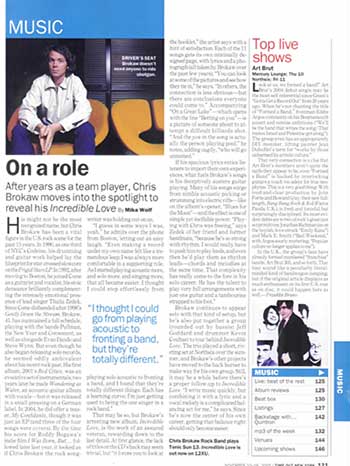 On a role
After years as a team player, Chris Brokaw moves into the spotlight to reveal his Incredible Love
By Mike Wolf
Photo: Anthony Saffrey

His might not be the most recognized name, but Chris Brokaw has been a vital figure in the U.S. rock scene for the past 15 years. In 1990, as one third of NYC's Codeine, his drumming and guitar work helped lay the blueprint for star-crossed slowcore on the Frigid Stars LP. In 1992, after moving to Boston, he joined Come as a guitarist and vocalist, his stoic demeanor brilliantly complementing the intensely emotional presence of lead singer Thalia Zedek. Since Come disbanded after 1998's Gently Down the Stream, Brokaw, 41, has maintained a full schedule, playing with the bands Pullman, the New Year and Consonant, as well as alongside Evan Dando and Steve Wynn. But even though he also began releasing solo records, he seemed oddly ambivalent about his recent rock past. His first album, 2001's Red Cities, was an evocative set of instrumentals; two years later he made Wandering as Water, an acoustic-guitar album with vocals -- but it was released in a small pressing on a German label. In 2004, he did offer a teaser, My Confidante, though it was just an EP (and three of the four songs were covers). By the time his score for Roddy Bogawa's indie film "I Was Born, But. . ." followed later last year, it looked as if Chris Brokaw the rock songwriter was holding out on us.

"I guess in some ways I was, yeah," he admits over the phone from Boston, letting out an easy laugh. "Even making a record under my own name felt like a tremendous leap; I was always more comfortable in a supporting role. As I started playing acoustic more, and solo more, and singing more, that all became easier. I thought I could step effortlessly from playing solo acoustic to fronting a band, and I found that they're totally different things. Each has a learning curve; I'm just getting used to being the one singer in a rock band."

That may be so, but Brokaw's arresting new album, Incredible Love, is the work of an assured veteran, rewarding down to the last detail. At first glance, the lack of titles on the CD's back may seem trivial, but "it forces you to look at the booklet," the artist says with a hint of satisfaction. Each of the 11 songs gets its own minimally designed page, with lyrics and a photograph (all taken by Brokaw over the past few years). "You can look at some of the pictures and see how they tie in," he says. "In others, the connection is less obvious -- but there are conclusions everyone could come to." Accompanying "On a Great Lake" -- which opens with the line "Betting on you" -- is a picture of someone about to attempt a difficult billiards shot. "And the you in the song is actually the person playing pool," he notes, adding cagily, "who will go unnamed."

If his spacious lyrics entice listeners to import their own experiences, what fuels Brokaw's songs is his deceptively austere guitar playing. Many of his songs surge from nimble acoustic picking or strumming into electric riffs -- like on the album's opener, "Blues for the Moon" -- and the effect is one of simple yet ineffable power. "Playing with Chris was freeing," says Zedek of her friend and former bandmate, "because he's so strong with rhythm. I would really have to push him to play leads, and even then he'd play them as rhythm leads -- chords and melodies at the same time. That complexity has really come to the fore in his solo career. He has the talent to play very full arrangements with just one guitar and a tambourine strapped to his foot."

Brokaw continues to appear solo with that kind of setup, but he's also put together a group (rounded out by bassist Jeff Goddard and drummer Kevin Coultas) to tour behind Incredible Love. The trio played a short, riveting set at Northsix over the summer, and Brokaw's other projects have moved to the back burner to make way for his own group. Still, it may be a while before there's a proper follow-up to Incredible Love. "I write music quickly, but combining it with a lyric and a vocal melody is a complicated balancing act for me," he says. Since he's now the center of his own career, getting that balance right should only become easier.