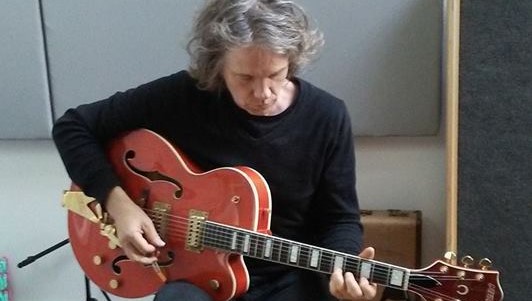 Chris Brokaw is a singer, songwriter, guitarist, drummer and film composer based in Boston. He was born in New York City and raised in the outlying suburbs. He attended Oberlin College, where he took exactly two music-related classes: Multi-track Recording and Steel Drumming.

Chris is perhaps best known for his work as the drummer in CODEINE and the guitarist in COME, who made several albums in the 1990's for the labels Sub Pop and Matador that are considered landmarks in American independent rock music.

Since 2001, Chris has focused primarily on his work as a solo artist, making numerous albums of vocal and instrumental music. This has ranged from full on rock ("Puritan", "Gambler's Ecstasy", "Incredible Love", "Red Cities") to explorations of the 6-string and 12-string acoustic guitars ("Canaris", "VDSQ Solo Acoustic Volume 3") to the experimental and abstract ("Tundra", "Gracias, Ghost of the Future","The Periscope Twins"). His 2017 cd "The Hand That Wrote This Letter" presents instrumental classical guitar versions of David Bowie and Prince songs, and his 2019 "End of the Night" explores, with a series of collaborators, what the last record of the night should sound like.

Throughout, Chris has maintained a busy solo touring schedule in the US, UK, Europe, Canada, Japan, Australia and Russia. In 2020 and 2021 he transitioned to online shows, performing occasionally on Facebook and Instagram. As of spring 2021, he is back to in-person performing.

He teaches guitar and drums, to both adults and children. Classes are in person in Cambridge, Mass., or by video.

He has composed music for the Dagdha Dance Company (Limerick, Ireland) and Kino Dance (Boston); collaborated with dancer Jimena Bermejo in a duo for dance and music (New York, Boston, and Belfast); collaborated with playwright Rinde Eckert and director Robert Woodruff on the opera "Highway Ulysses" (American Repertory Theater, Cambridge); performed as one of 77 drummers in the Boredoms' "77 Boadrum" (New York); and performed as one of 200 guitarists in Rhys Chatham's "A Crimson Grail" at Lincoln Center, New York. One of his projects, Dirtmusic (with Chris Eckman and Hugo Race), performed at the Festival In The Desert, in Essakane, Mali, and collaborated with the Touareg band Tamikrest on an album recorded in Bamako, Mali.

Currently, Chris performs both solo and with bassist Dave Carlson and drummer Pete Koeplin as the Chris Brokaw Rock Band. He also plays in the bands The Martha's Vineyard Ferries, Charnal Ground, and The Lemonheads, and in duos with Geoff Farina and Lori Goldston.

Plans for 2021 and 2022 include a return to touring and indoor performances. Chris is working with Fire Records of London, which will be reissuing of the entire catalog of Come, starting with 1994's DON'T ASK DON'T TELL, out October 22, 2021. An additional album of Peel Sessions, recorded by Come with famed DJ John Peel on his show on BBC Radio 1, are scheduled for release in April 2022.

Capitan Records was started in 2008 by Chris Brokaw as a means of releasing some of his prolific output. While he enjoys and prefers working with 'real labels', he understands that not everyone is equipped to deal with his onslaught on ambient guitar lp's, noise tapes, etc, especially given his lack of patience re the same. "Sometimes it's fun to record something at home and just get the damn thing on sale 3 days later", he says.

While Chris has actually employed publicists and distributors for some of these releases, he still refers to Capitan as "The Worst Label On Earth" and "wouldn't wish 'the Capitan Treatment' on my worst enemy". Consequently, he neither encourages nor accepts submissions for release. "Do it yourself", he suggests. "Trust me on this one."